Nate is the owner, founder and sole physical therapist at Uncommon Physical Therapy.

Nate is the founder and sole physical therapist at Uncommon Physical Therapy. He is residency-trained, and board-certified in sports physical therapy, with special interests in prevention, performance and recovery as it relates the promotion of a healthy and active lifestyle. Nate has been in the Birmingham area for nearly twelve years. He earned his doctorate at Washington University School of Medicine in St. Louis, completed a Sports Physical Therapy Residency at Gundersen Lutheran Medical Foundation in La Crosse, Wisconsin, and shortly after obtained his board-certification as a Sports Clinical Specialist. For the better part of his career, Nate was a part of the team at Champion Sports Medicine. Through that experience, he was fortunate to have developed many meaningful relationships with world-renown physical therapists, physicians and athletic trainers, all of whom were instrumental to his learning. He gained experience working with athletes of all levels, aided in the development of continuing education courses for staff, helped implement special interest programs for running-related injuries and ACL injuries for the community, and served as team specialist at Samford University. Over the last several years, he had the opportunity to join the acute therapy team at UAB, where he served as staff physical therapist working in various settings including orthopedics, trauma, cardiovascular, and even COVID units during the initial phases of the pandemic. He remains active in academics, serving as both a lecturer and lab assistant in the UAB DPT program, and is currently involved in clinical research within the UAB health system. Like many in the sports medicine field, Nate has a passion for athletics. Growing up, he was a multi-sport athlete, competing in hockey, baseball, football, golf, soccer, and tennis. Eventually, he played baseball at the collegiate level, but has remained highly involved with these and other sports to maintain a healthy and active lifestyle. It is through those experiences that Nate strongly advocates for multi-sport participation. Although a Minnesota native, Nate along with his wife Meagan, their children Ben and Betsy, and their Labrador retriever Izzy, now call Birmingham home. It is through his strong faith, his supportive family, and wonderful friends, that have all brought him on this uncommon journey. “You can’t be common. The common man goes nowhere. You have to be uncommon.” - Herb Brooks

Lance is the webmaster, and technical expert here at Uncommon Physical Therapy.

Lance is the webmaster, and technical expert here at Uncommon Physical Therapy. In addition to the technical side of things, he's the go to person for all the various projects and ideas that we come up with here at the clinic. Lance has lived in Birmingham his whole life, and graduated from the University of Montevallo. Lance and his wife Kelly have been together for almost 20 years, and have been married since 2009. They have two children together, Ella and Edie, two dogs Sadie, and Bindi, and various other random critters. Lance and Nate met at random, over 10 years ago. Lance was attempting to rehab his 2nd ACL rupture resulting from yet another soccer injury, which had unfortunately not gone as well as his 1st rupture. Lance was suffering from a condition called arthrofibrosis, which is an out-of-control healing response to injury or surgery that causes excessive scar tissue and adhesions. As a result of this, his knee was stuck in a locked position. It's not that the care he was receiving from his doctor and therapist was "bad", it was just "common", and unfortunately not enough. After the ACL reconstruction and months of physical therapy, as well as two additional manipulations under anesthesia (MUA) in this time period which gave little to no relief, Lance decided to seek out other medical advice, and other physical therapist care. After the 2nd MUA, and after reaching out and visiting with several surgeons, Lance ended up being paired with Nate as his new physical therapist. Nate took the time to learn about Lance as a patient, learn about what was working, as well as what was not, and then formulated a plan of attack. In addition to steering clear from the usual vanilla rehab protocol, Nate actually took the time to listen to new ideas that perhaps he hadn't considered, vs assuming that his way was the only way. Slowly, but surely, Lance began to re-gain the motion he had lost in his knee. He was able to begin running in a reduced weight environment, and eventually, was finally able to return to play. It was an extremely long and tedious road to recovery, but without Nate's Uncommon approach towards rehabilitation, there's no way that Lance would have been able to get back to full range of motion, or ever have the opportunity to play again, let alone get back to a normal and positive quality of life. Today, in addition to being the tech guy here at Uncommon Physical Therapy, Lance is the assistant varsity soccer coach at Pelham High School, where he has been involved with the program since 2009. The Panthers won their first ever State Championship in 2017, and have had 4 other Final Four appearances in that time period. If Lance isn't at home with the family, or in the clinic helping out, you can likely find him on the field coaching the next wave of champions! “Do you know what my favorite part of the game is? The opportunity to play.” -Mike Singletary

Manage Cookie Consent
To provide the best experiences, we use technologies like cookies to store and/or access device information. Consenting to these technologies will allow us to process data such as browsing behavior or unique IDs on this site. Not consenting or withdrawing consent, may adversely affect certain features and functions.
Manage options Manage services Manage vendors Read more about these purposes
View preferences
{title} {title} {title}
What is arthrofibrosis?

Arthrofibrosis (AF) is abnormal internal scarring inside the knee joint and surrounding structures. It may begin with sticky adhesions that can gum up the surfaces that are close to one another, such as the suprapatellar pouch above the patella, the anterior interval behind the patellar tendon, the area around the cruciate ligaments and the capsular ‘gutters’ at the side of the joint.

The abnormal ‘gumminess’ of these normally mobile tissues leads to painful knee stiffness. Attempts to bend the knee result in sickening pain above the knee in the region of the suprapatellar pouch. Aggressive physiotherapy tends to make the knee hot, swollen, red and painful, and instead of mobility improving it tends to worsen. Lack of understanding about the arthrofibrotic process may lead to doctor and physiotherapist berating the patient for not trying hard enough, and the patient may feel demoralized and angry. 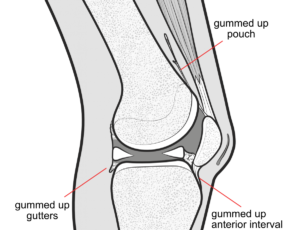 The objective of manipulation under anesthesia (MUA) for the knee is to break sticky adhesions gumming surfaces together before these adhesions turn into proper scar tissue. To this end, the procedure should be done early once it is appreciated that physiotherapy is no longer improving range of motion (ROM) or that ROM is getting worse. During the procedure the patient needs to be fully anaesthetized and under the influence of true muscle relaxants. The hip should be bent to 90 degrees and the surgeon hold the thigh near the knee and apply a gentle rocking motion of the lower limb through flexion and extension while observing improvement.

Not every practitioner will perform the manipulation in exactly the same way. By having the patient under anesthetic or deep sedation, the clinician is able to gently but firmly take the knee through as much of a range of motion as possible in order to free any adhesions. A danger of course is that the inexperienced practitioner may be too rough and cause damage to the tissues.